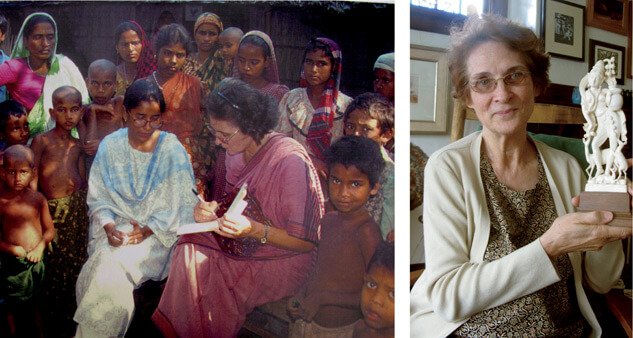 Suzanne Hanchett considers herself to have had four careers, spanning over the course of the last 40 years. Starting out as an academic anthropologist after receiving her Ph.D. from Columbia in 1970, she found herself denied tenure after 9 years of teaching, leaving her “casting about” as she considered her next career move.

“The reasons are still unclear to me, but I do not think I was very smart about office politics. I did not have good advice from my seniors, or if I did, I didn’t take it. Perhaps I didn’t choose the right place to teach. India was on the wrong side of the Cold War, and enthusiasm in the U.S. wasn’t high for India studies. Universities were also shifting to make more use of adjuncts and giving less tenure in 1978-79. I just don’t know”.

Now faced with a number of unfinished research projects, a divorce, a young child, and the realization that she did not want to leave New York, Suzanne tried various things before she found herself in grant writing and program development for some non-profits. One was a general purpose community development corporation, and the other was a network of reproductive health clinics in poor neighborhoods. She like it. A lot.

“I found that I prefer working with, and for, poorer people.”

After 8 years in the non-profit sector, Suzanne made yet another shift, this time into planning and program development for city government. Working with the health department and social services, Suzanne addressed issues related to child welfare, teenage pregnancy, and others.

“The work with NYC nonprofits and city government prepared me to get serious about planned change. It prepared me to deal with the practical matters involved in international development…But there was also the difficult question of weak support from my basic professional network.”

Working mostly with public health specialists and social workers, Suzanne found herself without a network of peers to act as a support system.

“I didn’t have an MPH, so I wasn’t eligible to join that club and get career support from them… social workers have their own very strong mutual support networks as well…anthropologists in NAPA were friendly, but there were no practical benefits coming from anthropologists as a community.”

It was during this time that Suzanne began to truly value the concept of “practicing anthropology”, giving her a continued sense of herself as an anthropologist who was hired based on skills sets, like writing, not because of her specific academic background.

“I did several interviews for [the NAPA] newsletter with anthropologists who had done practical/applied work, and I did two articles in Practicing Anthropology about academic and practicing/applied relationships and related topics.”

After 4 years in city government, the NYC mayor for whom Suzanne has worked was not re-elected, and she found herself considering another career move. Just then, a college friend and colleague contacted Suzanne with an opportunity. Having done her dissertation research in southern India years earlier, she was approached to help out in a study of women’s experiences with floods in Bangladesh. This was the start of her career in International development consulting.

“That was 1991, and I continued to work in Bangladesh, plus a few other places, until my last assignment there in 2010. For the last few years I have done some work for UNICEF, and lots of writing. A book is about to be published on the work in Bangladesh: Water Culture in South Asia: Bangladesh Perspectives.”

Suzanne notes that this kind of work is always interdisciplinary, causing her to spend much time with professionals from other disciplines. In her work on water issues specifically, she works closely with engineers, who do not necessarily see her expertise as especially important, questioning her credentials as a “scientist”.

“Often they see our social or gender-rights project activities as an annoying requirement. One needs a lot of tact to deal with these situations. The medically oriented professionals are somewhat more sensitive to social/cultural matters, but they also trust statistics more than case studies.”

This has required Suzanne to expand her toolkit so to speak, and incorporate skills and knowledge gained from other disciplines, like sociology.

“Using and knowing statistics, even simple statistics, has been a very important part of my development work.”

This does not, however, discount the distinct contributions her background in anthropology provides her when dealing with issues of international development, helping her produce new information about the specific impacts of programs on communities, and offering a unique perspective and specialization that can be applied to various topics.

“We are probably the only Ph.D.’s in development who actually bother to spend time talking with ordinary people in a systematic way. For example, when studying Bangladesh villagers’ relationship with arsenic removal filters provided by UNICEF, we found a pattern of concern that the filtered water was dangerously ‘cold’ and thus unsuitable for giving to sick children. Mothers were reverting to arsenic contaminated drinking water when their children got sick. Also, knowing something about South Asian culture and history has helped a lot in the Bangladesh work. But I am rather unusual among development consultants in focusing on one world area. Most development professionals move around from one country to another dealing (often rapidly) with technical issues but not knowing much about the particulars of local society or culture.”

“As an anthropologist working in development, we can offer our distinct skill sets to a variety of settings, specifically our sensitivity to cultural difference, power relationships, and the emphasis on ethnography and history… our training prepares us in subtle ways for work in almost any sector, on almost any issue involving human relationships.”

Suzanne offers us a perspective on applied anthropology that spans 40 years, and highlights the versatility, as well as some of the shortfalls, our discipline affords us. From academia to non-profits, to city government and finally development, one key aspect ties her experiences together:

“My attraction to all of these careers was an abiding interest in human society, and a wish to improve the world in some small way.”

“Almost everything was by chance and by seeking any available opportunities…. many work opportunities exist if one is ready to be creative and to accommodate to new work situations and people with different backgrounds.”

These brief interviews of some key anthropological practitioners appeared on the NAPA LinkedIn pages (2013); subsequent interviews were posted on the NAPA blog (2014). They are listed here by the most recent interviews. The interview series was produced by NAPA Communications Committee members Kristin Keller and Nicole Conand.